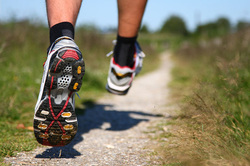 The Island is the perfect starting point for runners and cyclists as they begin their workouts.  Time the low tide right, you can run on the beach for miles in either direction (keep the latest tide table handy).

Hano Otto of Southern Cross Adventure organizes a number of trail and beach runs through the year - including a couple in our neck of the woods (the Wreck Trail Run, the Wreck Duo Challenge, the Wolwedans Adventure Run...).  Running with an organized group is a lot of fun, and it provides an opportunity to discover new routes (such as the trails in the Lagoon Bay and Hoogekraal area).  But often running is a more solitary experience.  If you are in need of inspiration, check out this YouTube video of Charl Pieterse's beach and trail run which is a good representation of what's on offer.
For roadrunners, the circuit from The Island, then turning left on Morrison Road, across the railway bridge and over to the day park parking lot at Southern Cross and back is about 4.5 kilometers. 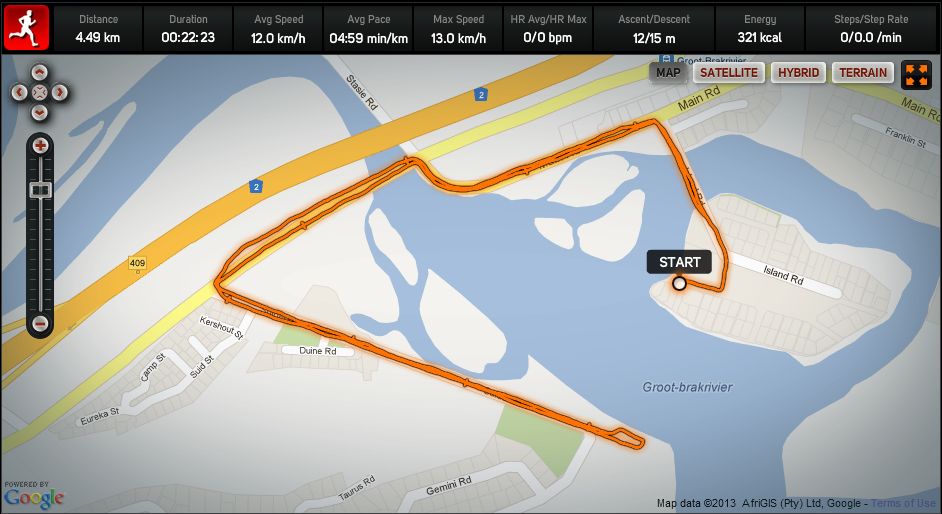 If you have more stamina - add another 1 kilometer or so by running up the hills in Southern Cross to the right of the parking lot - or for a real workout, take a right-hand turn on Morrison Road as you cross the bridge exiting The Island and tackle the hill to Hersham and beyond to Glentana.  The road can become narrow, so duck into the side streets if you are worried about traffic.

At about 7 kms, the loop into the village, down Station Street and back up Long Street and is a bit further than out to Southern Cross, but it is fraught with the perils of drivers pulling in and out of the shops on Long Street, so best be attentive if you go that route.

There are plenty of opportunities for good gravel road mountain biking up the hill to Wolwedans and on the gravel roads amongst the farmland beyond.  Recently, the Great Brak village has begun to publicize "The Fragrance Cycling Route" (pic and GPS tracking below).  Word has it the plan is to plant lavender at various points along the route - great idea!

You ride up the paved road (Amy Searle Street) past Greenhaven and continue up the hill where eventually you hit gravel road.  It's a circular route - and I've done it clock-wise (the opposite direction indicated by the red arrows in the map below).  Head up past Greenhaven, continue until you reach the Kleinvlei turn-off where you turn left (this road bisects the Botlierskop Private Game Reserve, so you'll enjoy a view of wildlife along the way!), and continue the loop, keeping right at the turn-off for Bain's Lodge (formerly Yellowoods), which is not marked on the map, but near the "23 km" notation.  Before you know it, you'll find yourself cycling through the tiny hamlet of Friemersheim, before rounding the corner at the top of the map and heading back toward the village of Great Brak River.  Of course, if you want to be conventional, you can follow the route direction as indicated by the arrows on the map below and do the counter-clockwise version. :)  It can be pretty dry and gruelling on a hot day, so head out early and take plenty of liquids for hydration. 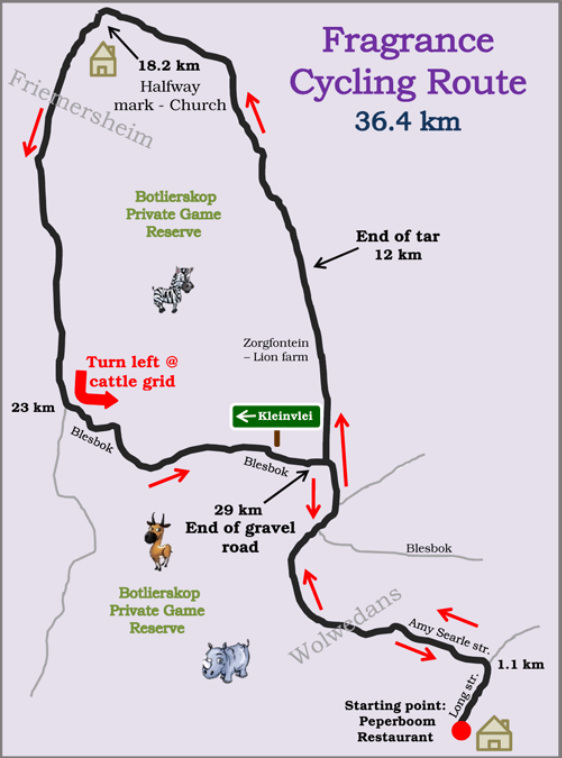 More detail about the Fragrance Route can be found in this separate section of the website.
Here are a couple of shorter routes (one about 30 km, the other 34 km)  from The Island, up the hill at Hersham and Glentana and back along the R102 with a little zip out to Southern Cross and back to The Island - the longer version goes out to Tergniet then back on the gravel road near Leani's Nursery before heading back to The Island via the village loop.

For something a bit different, you can ride along the stretches of beach at low tide.  There's usually only a couple of chances a month to do these rides, as the best time to do so is when the tides are at their lowest (when the height is somewhere between 0.16 - 0.23), coincident with either a new or full moon (you can find links to tide tables here).  The sand is usually hardest packed in the 45-minute window on either side of the low tide - otherwise, it can get a bit mushy.  It can still be a tough slog, but it's something different!  Be sure to give your bike a thorough rise with the garden hose to get rid of the sand and salt and re-grease once you're finished. 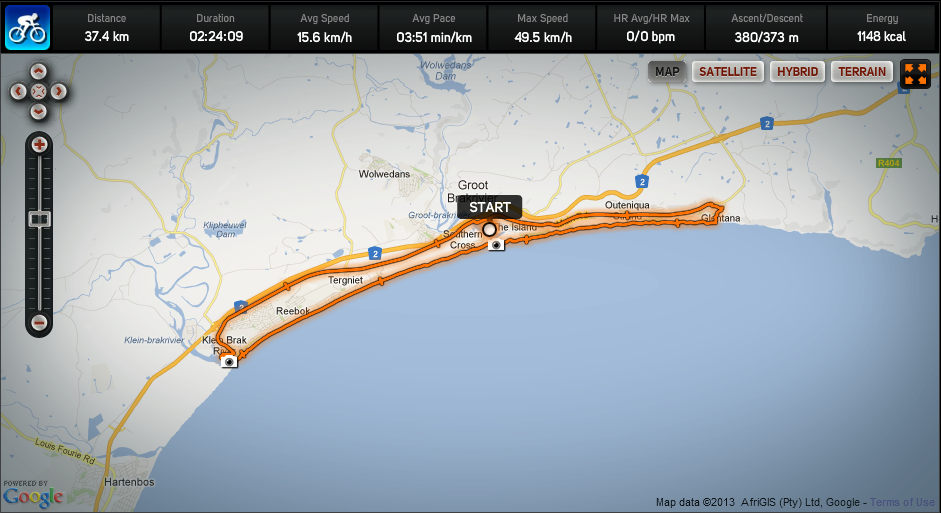 Recently, as part of the Great Brak River Tourism Initiative, a number of cycling routes have been mapped.  You'll see a bit of an overlap with some of those I've posted here - but they're worth checking out.  See the Great Brak Village - Cycing Routes for details of the routes favoured by local Great Brak cycling club "The Big Dog Riders".

Also be sure to check out the Island Blog part of this website which has various other ad hoc routes in the area - select the "cycling", "mountain biking" or "mtb" categories.
For more cycling in the area see the handy map of cycling routes which Tourism Mossel Bay has put together - it covers the entire area between Mossel Bay and Glentana (the more serious runners out there will find it handy, too).  MTBRoutes.co.za also has a number of Garden Route MTB trails plotted on their website. SAN Parks also has a series of user-pay trails that are within driving distance from The Island.

If don't mind a bit of a drive, you'll find some of the best single-track in the country at the Garden Route Trail Park, situated near Rheenendal between Sedgefield and Knysna.  Highly recommended!  They also have rental bikes available (and also accommodation, in case you find yourself having just too much fun to leave - a distinct possibility!). 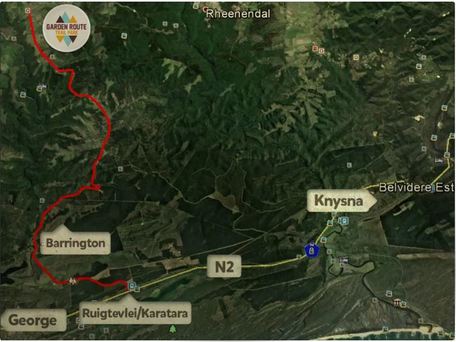 You'll typically find the roadies on the old R102 or the Outeniqua Hop.

One last note:  it's always a good idea to cycle with a buddy - the various cycling shops in George & Mossel Bay can put you in touch with clubs in the area.