Golf on the Garden Route 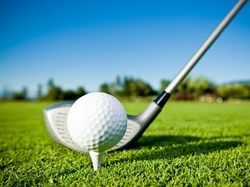 If you like golf then the Garden Route is the place for you - and you'd certainly be in good company with the likes of Harold Bay's Ernie Els, Mossel Bay's Bertus Smit, Louis Oosthuizen and Lee-Anne Pace to name just a few.  But don't worry if you aren't a pro or scratch player - there's golf here for all budgets and abilities.  And it all starts just meters away from The Island, where on the other side of the bridge on Morrison Road you'll find the Dolphin's Creek Golf Estate.  It's a short course (you'll probably only need your driver on one 300 meter par 4 hole), but challenging.  The last time I checked it was just R50 for 9 holes or R80 for 18 (there are just 9 holes but 18 tee boxes, so yes, there is a bit of ducking and diving during peak season!).  That said, it's perfect for honing your short game followed by a well-deserved beer or snack in the clubhouse afterwards.  Visitors are welcomed with open arms - and if you need them, they've got rental clubs, trolleys and carts.

Of course, there's a good chance you're a bit rusty and could use with hitting a few balls before heading out.  The driving range on the right-hand side of Long Street as you drive into the village of Great Brak is only open during the Christmas/New Year's holiday season, but and there are driving ranges at the Mossel Bay Golf Club, Oubaai at Herold's Bay and Kingswood Golf Club in George.  It's worth noting you're not usually allowed to use your driver on the Kingswood range, as a long hitter, with help from a bit of wind, can easily roll a ball in the pro shop (don't laugh, it's happened...) or dent the cars in the parking lot.  So, if you're looking for a place to bring out the big dog, then Oubaai is the closest.  There's also a practice facility at Fancourt if you already have a game booked there.  There's also a rather rough and tumble driving range at The ProShop in George, too (some of the balls are older than I am...).

If you are serious about making improvements to your game, then head into George.  In my opinion (and I'm not alone) there's no better teaching professional around than Val Holland, Director of Golf & Teaching Pro at Kingwood Golf Club.  Coach of the SA National Women's team since 2006 - and Lee-Anne Pace - Val has been named "Coach of the Year" for several years running.  You can find out more about her coaching specials on the Val Holland Coaching Centre FaceBook page - or call her on 086 172 7170.  I take at least 3 lessons from her each season (you can buy a package of 6 which you can share with someone else - great if you're looking for a Christmas present).  For the up-and-coming, über serious junior, there's the KeNako Golf & Sports Academy adjacent to the Kingwood Golf Club.

SA Venues has a handy map with descriptions, addresses & booking info for the myriad of golf courses along the entire Garden Route - click on the image to the left to go to their website.

In the last 10 years I've played all of the courses in the Garden Route but now I regularly play at George, Mossel Bay and Kingswood - and when I'm feeling a bit flush, I'll head over to Fancourt (I prefer the Outeniqua course over Montagu), maybe drive to Knysna for a round at Simola, or Pezula (which I think is far more interesting than Simola - but the carries can be difficult for the ladies and short hitters) and occasionally, I'll play Pinnacle Point or Oubaai when there isn't too much wind or I've got an out of town visitor.  Pinnacle Point has quite a few carries which can be particularly difficult in the wind, but the ladies I've played with have found it much easier than Pezula.

Save on Green Fees

Another way to save on your green fees - especially at the more expensive courses - is to take advantage of the deals offered through Flook or Golf Passport.  Flook mostly has deals that combine green fees with accommodation - but you will find green fee discounts for 4-balls, and occasionally 2-balls, so it's definitely worth a look.  Golf Passport has several combinations of rounds at the various Garden Route courses - if you plan on hitting the premier courses, you'll definitely save a few rand, so it's worth checking out (they book the tee times for you, but you can change them via the clubs).  You don't have to play all of the courses at once, so it also works if you're here for Christmas and then back again at Easter, etc.  Not all include carts or lunch at the halfway house in their fees, so double-check if you're unsure.

Oubaai also has a couple of good deals if you are looking to play there often - they have "Club 15" and "Club 30" packages - check out this blogpost from Dec 22, 2015 for more details.

If you need some golf gear, be it balls, clothing or a new driver, all of the clubs' pro shops can help you out, of course.  But you'll find a wider selection at The Golfer's Club on York Street in George.  The ProShop on Knysna Road in George, is moving to much larger, flagship premises near the Garden Route Mall in October, 2016, though I understand they'll keep their existing location and use it for demos, used club sales and keep the driving range going.

Check out the blog's Golf tag for the latest on golf in the Garden Route.