For the Adrenaline Junky

Is relaxing on the beach or drifting along the river too mundane for you?  No worries, if it's excitement you're craving, there are plenty of thrills to be had in the Garden Route. Here's a short list to get the blood pumping. 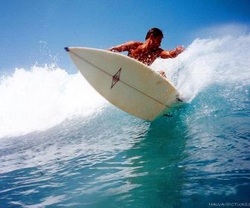 The Garden Route has produced a handful of surfers who have made it on the pro tour.  Why shouldn't you be the next?  Like anywhere, it's much busier during the holiday season, but there are plenty of places to check out.  Just beware of the great whites which are present along the entire coast...  Still raring to go?  Here are a few handy links:

If you're not quite ready to go out on your own yet, then why not take a lesson or two?  Waves Surf School, headed up SA Junior Surfing Team Head Coach, Llew Whittaker (who is now back home after being on the international pro circuit), or the guys at Billeon, who also offer sandboarding trips, are both located in Mossel Bay and will get you upon a board in no time.  Helpful hint:  start doing those push-ups to get in shape before you get here! 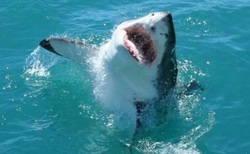 It kind of seems logical to post about Shark Cage Diving immediately after the Surfing entry above, doesn't it?  It is pretty controversial in some quarters, but if that's your thing, then White Shark Africa in Mossel Bay offer trips. 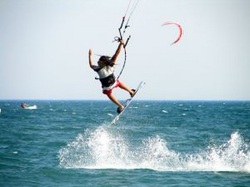 Sometimes you'll see a beginner trying their hand at kitesurfing in the shallows of the Great Brak River or working on their kite-handling skills on the beach, but most of the kitesurfing action is found in Sedgefield just down the road a bit on the N2. 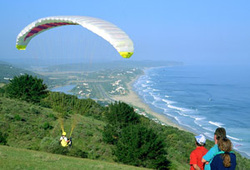 If you've ever driven along the N2 between George and Knysna, you've probably seen them floating overhead.  Wilderness, Sedgefield and Brenton-on-Sea really are a mecca of sorts when it comes to paragliding in South Africa.  Launching sites can be found here (zoom in on the map) or check out the list, photos and descriptions on Cloudbase Paragliding's site. Jan Minnaar & Khobi Bowden offer lessons as well as tandem flights for those that want to give it a try.  Highly recommended!

Still not sure - or perhaps you are more of a watcher than a do-er?  No worries - take a drive up to Map of Africa above Wilderness and watch the guys & gals take off and land on the beach below. 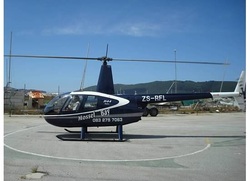 If you are looking for something completely different, then try a helicopter flip with Kobus Crous who owns Mossel Bay Helicopters and Bergsig Game Farm.  There's nothing quite as exhilarating as skimming just above the water, and of course, you get a completely different vista of the coast.  Rest assured that you are in good hands with Kobus (these "flips" as they're called, are just a very small part of his professional flying business).